Social sharing
By Stephanie Nebehay and Lisa Barrington
GENEVA/BEIRUT – The United Nations suspended all aid shipments into Syria on Tuesday after a deadly attack on a convoy carrying humanitarian supplies, as a week-old U.S.-Russian sponsored ceasefire collapsed in renewed violence.

Washington said it was “outraged” by the apparent air strike that hit a 31-truck aid convoy late on Monday.

Russia, which is allied to the government of President Bashar al-Assad, denied that either its air force or that of the Syrian armed forces were responsible. The Syrian army also denied blame.

Moscow said only insurgents knew the full whereabouts of the convoy, but this contradicted the United Nations, which said all parties had been notified and the trucks were clearly marked.

The Syrian Red Crescent said the head of one of its local offices and “around 20 civilians” were killed.

The strike on the aid convoy appeared to deliver a death blow to the ceasefire, the latest failed attempt to halt a war, now in its sixth year, which has killed hundreds of thousands of people and created the world’s worst refugee crisis.

Syria’s army declared the ceasefire over on Monday, hours before the strike. While the United States initially said it was still hopeful of extending the truce, U.S. officials acknowledged in the wake of the attack that there might no longer be any agreement left to salvage.

That would most likely wreck the last hope of any breakthrough on Syria before the administration of President Barack Obama leaves office in January, meaning his successor will inherit a war that has split the Middle East on sectarian lines and drawn in global and regional powers.

The ceasefire was meant to halt all fighting and allow aid to reach besieged areas, at a time when pro-government forces, with Russian and Iranian military support, are in their strongest positions for years and civilians in many rebel-held are completely cut off from food and medical supplies.

“As an immediate security measure, other convoy movements in Syria have been suspended for the time being pending further assessment of the security situation,” Jens Laercke, a U.N. humanitarian aid spokesman, told a briefing.

The attack on the convoy of the Syrian Arab Red Crescent destroyed 18 of 31 trucks. 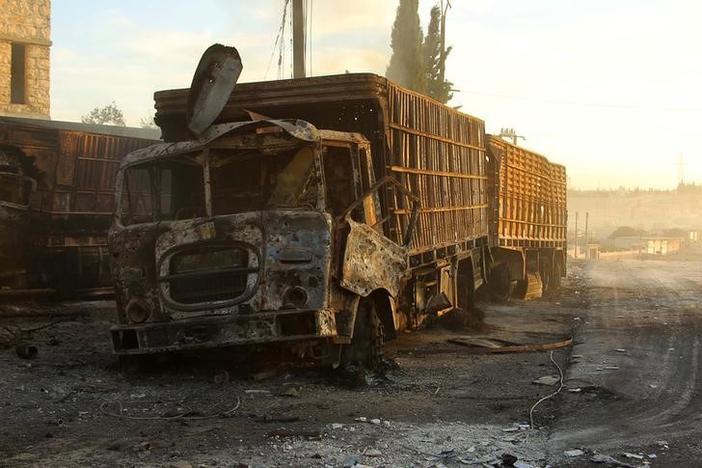 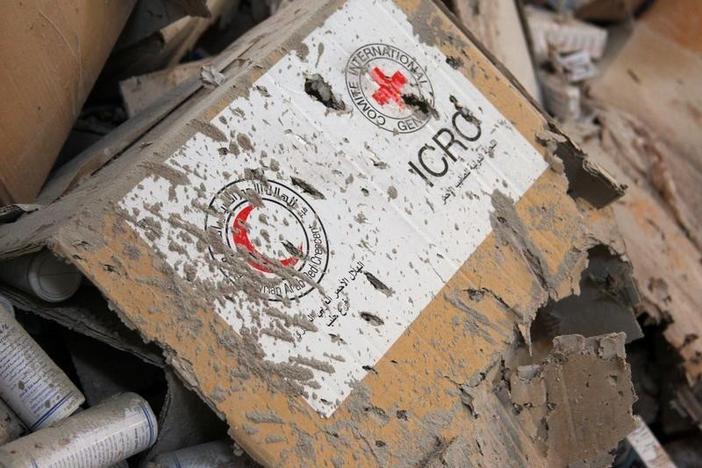 “If this callous attack is found to be a deliberate targeting of humanitarians, it would amount to a war crime,” U.N. aid chief Stephen O’Brien said in a statement. Peter Maurer, president of the International Committee of the Red Cross (ICRC) called it a “flagrant violation of international humanitarian law”.

While there were contradictory reports of the full death toll, one of those killed was the head of the Syrian Red Crescent for the area, Omar Barakat. The team on the ground was “in shock,” said ICRC’s Middle East chief, Robert Mardini.

The United Nations had only just received permission from the Syrian government to deliver aid to all besieged areas in the country, and had notified Washington and Moscow of the convoy’s route.

A local resident told Reuters by telephone that the trucks were hit by about five missile strikes while parked in a center belonging to the Syrian Red Crescent in Urem al-Kubra, a town near Aleppo.

At the time of the strike, U.S. and Russian officials had been meeting behind closed doors in Geneva to discuss extending the ceasefire, although Syria’s army had already declared the truce over and announced it would resume fighting.

Washington was “outraged”, said U.S. State Department spokesman John Kirby. “The destination of this convoy was known to the Syrian regime and the Russian federation and yet these aid workers were killed in their attempt to provide relief to the Syrian people,” he said in a statement.

Kirby said Washington would raise the issue with Moscow and reassess the future of its cooperation with Russia.

Kremlin spokesman Dmitry Peskov said it was unlikely the ceasefire could be salvaged, and blamed Washington for failing to fulfill its obligation to separate jihadist fighters from insurgent groups covered by the truce.

A Russian Defense Ministry spokesman, Igor Konashenkov, said the Russian and Syrian air forces were not involved, and appeared to blame the insurgents: “All information on the whereabouts of the convoy was available only to the militants controlling these areas.”

Syria’s state news agency SANA quoted a source in the army as saying: “There is no truth to reports carried by some media outlets that the Syrian Arab Army targeted a humanitarian aid convoy in the Aleppo countryside.”

After five years of fighting that made a mockery of all peacekeeping efforts, the ceasefire deal was a gamble on unprecedented cooperation between the United States and Russia. Trust between the two Cold War-era foes is at its lowest point for decades.

The deal called for Washington and Moscow, which support opposite sides in the war between Assad’s government and insurgents but are both fighting against Islamic State militants, to eventually share targeting information, the first time they would have fought openly together since World War Two.

It was negotiated by Secretary of State John Kerry during months of intensive diplomacy, despite scepticism from other senior officials in the Obama administration.

Following the attack, a senior Obama administration official said of the ceasefire: “We don’t know if it can be salvaged.”

“At this point the Russians have to demonstrate very quickly their seriousness of purpose because otherwise there will be nothing to extend and nothing to salvage,” the official, who spoke to reporters on condition of anonymity, added.

Kerry, in New York for a U.N. summit, said the future of the agreement would depend on Moscow.

“The Russians made the agreement. So we need to see what the Russians say,” he said. “But the point – the important thing is the Russians need to control Assad, who evidently is indiscriminately bombing, including of humanitarian convoys.”

The air strikes appeared particularly heavy in insurgent-held areas west of Aleppo, near the rebel stronghold of Idlib province. And in eastern Aleppo, a resident reached by Reuters late on Monday said there had been dozens of blasts.

“It started with an hour of extremely fierce bombing,” said Besher Hawi, the former spokesman for the opposition’s Aleppo city council. “Now I can hear the sound of helicopters overhead. The last two were barrel bombs,” he said, the sound of an explosion audible in the background.