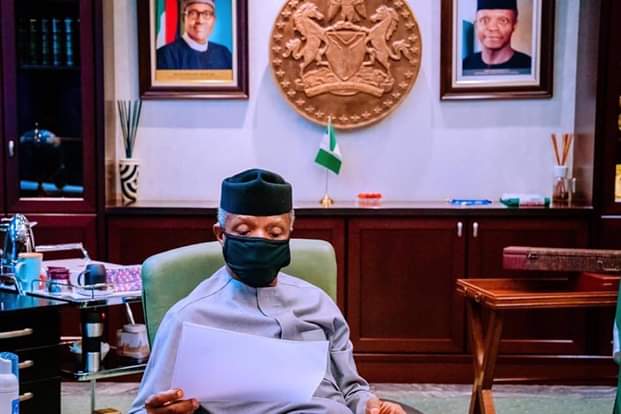 The Nigerian Presidency has replied the leadership of the National Assembly over the N2 Trillion Social Investment Programme(SIP).

The Presidency, in a lengthy response signed by the Special Adviser to the President on Social Investments, Maryam Uwais, explained how the program was managed. Read the full statement below;

“My attention has been drawn to the online report of the Nation newspaper of 7th April 2020, with the above caption. Indeed, several other online publications carried similar stories, alleging that the National Social Investment Programmes (NSIPs), as supervised under the Office of the Vice President, were a ‘scam’. Given the gravity and implications of the narrative conveyed, as well as the calibre of persons involved, it has become necessary to clarify the issues in the public domain.”

“That the National Social Investment Programme has gulped over N2 trillion since 2016 when the fund was created. UNTRUE.”

“Although the total appropriation by the National Assembly (NASS) from inception, for the 4 NSIPs, is N1.7 trillion, the actual funds released for the NSIPs between January 2016 and October 2019 (when the NSIPs were handed over to the Ministry of Humanitarian Affairs, Disaster Management and Social Development), amounted to N619.1 billion, constituting 36.4% of the total appropriation from the NASS.”

“These releases covered operational activities and payments to 13,363,680 beneficiaries across all the 4 NSIPs, all of whom can all be verified either through their BVN numbers or their unique numbers generated by the National Social Register, those identities having been generated for the poorest of the poor who do not own bank accounts for sundry reasons.”

“As at September 2019, the funds had been expended as follows, on the: Job Creation programme (549,500 N-Power graduates and non-graduates and 7 Technology Hubs); National Home Grown School Feeding Programme (in 33 States, 9,963,762 pupils to 107,862 cooks in 54,952 primary schools); the National Cash Transfer Programme (including the development of the National Social Register by the National Social Safety Net Coordination Office) 1,491,296 poor and vulnerable households comprising 6,056,872 individuals in 33 States and 620,947 cash transfer beneficiaries; and the Government Enterprise and Empowerment Programme (managed by the Bank of Industry); a total of 2,279,380 TraderMoni, MarketMoni and FarmerMoni beneficiaries.

That as part of the conditions for poor and vulnerable beneficiaries to be engaged, they are made to apply online, through the internet and they require a BVN for payment. UNTRUE”

“The National Cash Transfer Programme derives all the cash transfer beneficiaries from a National Social Register (NSR), comprising State Social Registers that are developed and hosted by the State Ministries of Panning of each State. The process for objective identification of poor and vulnerable households is as provided in the Financing Agreement (F.A) signed between Nigeria and the World Bank, for which purpose the World Bank IDA Credit and the recovered funds from the Abacha family are being utlised. The process involves a poverty mapping of the LGAs in each State, community mobilization, targeting and identification supported by trained enumerators at State and LGA levels, after which each of the households identified by the communities is visited and data collated, which information includes fields such as the size of household, age, gender, persons with disability (if any), assets, vocation of head of household, educational qualifications (if any), dwelling house conditions, etc.”

“Finally, all the data collated is subjected to a proxy means testing formula to determine those who merit the grants and the accompanying training. Even though each State hosts its own information, all of the data is hosted at the National level as the National Social Register. As at March 31st 2020, the NSR comprised 11,045,537 individuals from 2,644,495 households, collated from 35 States, 453 LGAs, 47,698 communities. Each and every beneficiary has a generated unique number and can be tracked.”

“Furthermore, payment service providers have been selected in an open procurement process to pay the cash beneficiaries at their locations, as many of them reside in communities where there is a dearth of banking infrastructure. Even though the majority of beneficiaries are not financially literate, the National Social Investment Office (NSIO, then under the Office of the Vice President) commenced the pilot exercise of payment of beneficiaries in 6 States through microfinance banks in September 2019, with a 93% success rate. The exercise was preparatory to full digitization, especially with the impending cashless policy in March 2020.”

“It is also pertinent to mention that the National Economic Summit Group, (working with Accenture and the Busara Centre for Behavioral Sciences) formed the Policy Intervention Unit for the NSIO. Furthermore, in addition to the World Bank’s strict auditing responsibilities, the African Network of Environmental and Economic Justice has provided over 700 monitors across all the LGAs where the NSIP beneficiaries exist. The link to the Report is to be downloaded at: https://aneej.org/…/Mantra-Field-Report-final-compressed.pdf. Indeed, the ICPC, EFCC & the DSS were also invited to monitor the process to protect the beneficiaries, after they receive the benefits in the field.”

“It is only in respect of the Job Creation programme that applications are made online. That particular programme was initiated for youth who consist of graduates and non-graduates, as with JAMB candidates who continue to apply for their own admission, online. Indeed, all the LGAs around the country currently have N-Power beneficiaries serving in sundry capacities. The utilization of the BVN for N-Power beneficiary payment is also as a means of identity (since the NIN number can be generated from the BVN) and to facilitate the tracking of payments and further ensure accountability.”

“The identities of the cash transfer beneficiaries are protected by law (the FOI Act), as the consent of recipients of social grants is a pre-requisite, before disclosure. They can, however, be found and verified through the LGA community facilitators (CTFs) who have been trained to support them by weekly visits to the wards. The names, wards, LGAs, States and phone numbers of the CTFs can be found at http://n-sip.gov.ng/resource-data/, as the data collation continues to grow around the country.”

“The Leadership of the Senate also stated that the NSIP information was not accessible to the National Assembly. UNTRUE”
“It is, however, on record that all invitations to public hearings and meeting by the NASS were honoured by the myself (as the supervisor of the NSIPs) and the cluster teams, while documents relating to the structure, activities and progress of the NSIPs were routinely shared with them, over the period that the NSIO supervised the NSIPs under the auspices of the Office of the Vice President (OVP). Furthermore, the monthly reports of 3,000 N-Power monitors, spread across the 774 LGAs, are available to both Poverty Alleviation Committees of the NASS.”

“It should also be noted that the accounting and procurement aspects of the NSIPs were handled by the Ministry of Budget and National Planning on behalf of the NSIO, and not the OVP. All requests for information related thereto were responded to, by that Ministry.”

“It was further asserted, apparently, that because the beneficiaries are not known personally to the NASS members, the National Social Register is a ‘scam’ and needs to be reformed through a process that is ‘more inclusive’ of the NASS. REGRETTABLE & DANGEROUS.”

“The NSR comprises persons selected by the communities directly, within the constituencies of each of the NASS members. No person has been imported from one community to the other. They have been identified as very poor by the communities in which they reside and may not necessarily be known by the lawmakers. Verification of their identity and status is possible, as has been for all investigative journalists and monitors, through the CTFs.”

“It should be noted that Nigeria has signed a Financing Agreement with the World Bank, in which the process of identification of beneficiaries was set out. Any departure from the process, which would place at risk the accessibility to the IDA Credit and the recovered funds from the Abacha family.”

“The demand for the inclusion of candidates to the NSR from the NASS has been a recurring issue from the inception of the NSIPs. My role and singular focus has simply been to comply with the terms of Agreement and the MoU entered into by the Federal Government of Nigeria, as well as to establish an objective, efficient and transparent process for uplifting the poor out of poverty through structures and mechanisms that are credible and sustainable.”

“I have consistently reminded both NASS Committee Chairmen on Poverty Alleviation that there is no social protection programme in the world in which politicians are responsible for selecting the beneficiaries of cash transfers. All successful social protection programmes extract their beneficiaries from an objective community platform, if only to ensure that the poorest of the poor are supported out of poverty in an inclusive community driven and timely manner.

The data being collated in each household enables the accurate and scientific measurement and tracking, to assure of analysis and research towards resolving poverty.”

“Since poverty knows no ethnicity, religion or political affiliation, the process must be insulated from influences that are likely to deviate from achieving the desired objective of alleviating abject poverty, rather than be used for patronage or as compensation for loyalty.”

“The tripartite process for identification of cash transfer beneficiaries is in accordance with similar established best practice the world over, as the communities in which the poor reside know who is most in need. The community takes ownership and supports the process, if engaged in the identification of the needy. While not perfect, the process is as near authentic as is possible in the circumstances, as we continue to strive towards improvement. Building the State Social Registers has been a painstaking and continuous collaborative effort, with huge amount of funds expended in striving to achieve the credibility that would be put to waste, if discarded as suggested. Reform is certainly welcome, but not the ‘reform’ that would introduce influence and partisanship into the NSR, thereby making a mockery of the critical data so far collated around the country.”

“The NSIPs have been handed over to the Ministry of Humanitarian Affairs since October 2019, but it has become necessary to respond to the unfortunate allegations made at the National Assembly on the 7th of April 2020, which allegations were made in respect of certain aspects of the NSIPs from inception in November 2015 to September 2019. This response is necessary for the purpose of:

“Safeguarding the entitlements of the poorest of Nigerian citizens, whose benefits are likely to cease because they are not known or connected to NASS members or any other person of influence;

“Protecting the integrity of the NSR, which development has been a painstaking process over the past 4 years, along with the huge investment and effort expended on data that is critical for development and poverty analysis; and Ensuring compliance with the World Bank Financing Agreement (FA) signed by Nigeria and the World Bank, as well as the Memorandum of Understanding signed by Nigeria, the Swiss Government and the World Bank, to facilitate the return of the funds recovered from the Abacha family.”

“Disregarding the process set out in the F.A would risk the suspension of the utilization of the IDA Credit and the recovered funds for the cash transfer beneficiaries. That balance which is currently over $500m, would be placed at risk. In the current Nigerian situation, we cannot afford to lose such a huge amount of resources that have been provided to support the poorest of the poor out of poverty.”

“This Statement is prepared to set the records straight on certain aspects of the processes, structure and activities of the NSIPs between November 2015 and September 2019 when I supervised the NSIO operations. Having handed over the NSIPs in October 2019, I assume no responsibility for the operations thereafter as the Ministry is well-positioned to handle the NSIPs and take decisions thereupon. Thank you.”