As the hundreds of thousands of registered voters in Ondo ‎State get set to pick their next governor, it is expected to be four-horse race despite having 28 governorship candidates.

Eyitayo Jegede of the state’s ruling PDP, Rotimi Akeredolu of Nigeria’s ruling APC, and Olusola Oke of the AD are the main challengers.‎ Olu Agunloye of the SDP may also pull a surprise.

8.24: In Okitipupa, in Oktitipula Local GA eletoral materials have just started trickling in. Most units are yet to get materials.

Few units have begun setting up ttheir tables and pasting of registers as voters search for their names.

8.29: At Okitipupa Ward 1, Stella Maris College, electoral officers just arrived. But they seem to be confused about issues of materials. Security men arrived on time. There are no voters in sight as yet. 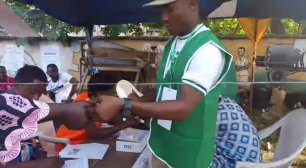 8.45: Card reader down at Unit 2 ward 9 Oke Aro/ Uro by CAC Primary School. Electoral officials said they called the attention of the technical officer who promised to bring another card reader about 10 minutes. Voters are already getting agitated and asking the officials to use incident form if the replacement isn’t coming on time.

READ ALSO  A discourse on the Security Chiefs in Nigeria

The Ondo gubernatorial election took off on an encouraging note in and around Akure township.  INEC officials arrived at polling units several minutes before the 8 a.m. start time for accreditation and voting.

Many of the electoral officials are seen educating voters on the rules and processes of casting their votes.

Party agents also appear to be having  cordial working relationship with INEC  officials.

There have been very little complaints of failing card readers and missing names on voters registers.

However,  the card reader  at Unit 2  ward 9 Oke Aro/ Uro by CAC Primary School failed to work.  Electoral officials at the unit said they had already complained to the technical officer at about 8.45 a.m. who promised to bring a replacement.

However, voters are already getting agitated. Some of them were loudly asking the INEC officials at the unit to use the incident form, used in cases where the electronic card readers malfunction.

Security arrangement is working well.  There are at least five police officer and operatives of other security agencies at every polling unit.

Police vans could be seen patrolling the town and checkpoints were mounted at strategic locations.

We haven’t heard or seen of cases of violence or ballot boxes or open manipulation or financial inducement  of voters.

10.28: The candidate of Alliance for Democracy Olusola Oke, during a phone-in interview on Alaba FM said he got reports of card readers preloaded with about 300 votes at Idi Ogba. Alagbon,  Oke Igba.  He said this is becoming a trend across the state.

10.32: Although the Ondo gubernatorial election took off on an encouraging note in most polling centres across the state, reports of card reader failure appear to be slowing down the voting pace.

INEC officials and voters arrived at polling units several minutes before the 8 a.m. start time for accreditation and voting.

PREMIUM TIMES observed that the card reader at Unit 2 ward 9 Oke Aro/ Uro by CAC Primary School in Akure failed forcing electoral officials to call the attention of the technical officer who promised to bring another card reader in about 10 minutes.

Voters became agitated and asked the officials to use incident form if the replacement isn’t coming on time.

Also, the card reader for Alagbon ward 2, unit 22, Ilaje LGA, developed faults not long after accreditation and voting began in the unit and voters remain stranded.

The Nigerian Military also arrested a polling officer at Ugbonla jetty on his way to change the card reader. He was however, released after explaining his mission for travelling. Party agents complained about his mission.

The Ondo election will produce the state’s next governor to replace outgoing Olusegun Mimiko. 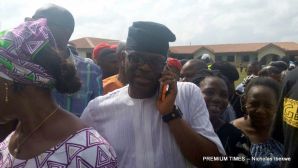 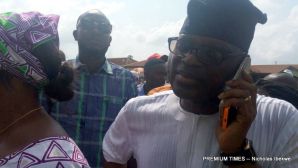 Eyitayo Jegede, the Governorship candidate of the PDP queuing up to vote at his polling unit in the Cathedral Area of Akure.

10.49: Olusola Oke, the AD governorship candidate, votes. He said he is confident of victory because Ondo people have been yearning for genuine change.

His unit 5, at Ilowo Ilaje ward 3 was peaceful and the turn out was impressive.

11.00: There is chaos at Ilaje as Card reader at unit 13, Ido Ogba ward 2, Ilaje registers 300 voters before arriving polling unit.

Residents have ‘arrested’ the INEC officials there vowing to keep them until they rectify the anomaly.