[Reuters]  Interior minister Theresa May will become Britain’s prime minister on Wednesday, with the task of steering its withdrawal from the European Union, after rival Andrea Leadsom abruptly terminated her short-lived and disastrous leadership campaign.

May, 59, will succeed David Cameron, who announced he was stepping down after Britons unexpectedly voted last month to quit the EU. Britain’s planned withdrawal has weakened the 28-nation bloc, created huge uncertainty over trade and investment, and shaken financial markets.

May and Leadsom had been due to contest a ballot of grassroots Conservative party members, with the result to be declared by Sept. 9. But Leadsom unexpectedly quit on Monday after a campaign dogged by ill-judged comments about her rival’s lack of children and questions about whether she had exaggerated her CV.

“I am honored and humbled to have been chosen by the Conservative Party to become its leader,” said May, who favored remaining in the EU but has made clear there is no going back on the result of the June 23 referendum.

“Brexit means Brexit, and we’re going to make a success of it.”

Earlier, Cameron told reporters in front of his 10 Downing Street residence that he expected to chair his last cabinet meeting on Tuesday and take questions in parliament on Wednesday before tendering his resignation to Queen Elizabeth.

“So we will have a new prime minister in that building behind me by Wednesday evening,” he said. 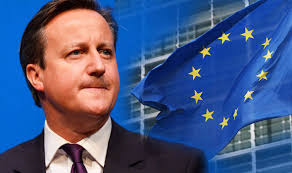 Her victory means that the complex process of extricating Britain from the EU will be led by someone from the losing side of the acrimonious referendum campaign. She has said Britain needs time to work out its negotiating strategy and should not initiate formal divorce proceedings before the end of the year.

In a speech earlier on Monday in the central city of Birmingham, May said there could be no second referendum and no attempt to rejoin the EU by the back door.

“As prime minister, I will make sure that we leave the European Union,” she said.

Leadsom, 53, is a junior energy minister who has never served in cabinet and was barely known to the British public until she emerged as a prominent voice in the successful Leave campaign.

She had been strongly criticized over a newspaper interview in which she appeared to suggest that being a mother meant she had more of a stake in the country’s future than May, who has no children. Some Conservatives said they were disgusted by the remarks, for which Leadsom later apologized, while others said they showed naivety and a lack of judgment.

Leadsom told reporters she was pulling out of the race to avoid nine weeks of campaign uncertainty at a time when strong leadership was needed. She acknowledged that May had secured much greater backing in a vote of Conservative members of parliament last week.

“I have … concluded that the interests of our country are best served by the immediate appointment of a strong and well supported prime minister,” she said. “I am therefore withdrawing from the leadership election and I wish Theresa May the very greatest success.”

Graham Brady, head of the Conservative party committee in charge of the leadership contest, confirmed that May had been elected with immediate effect.

The pound, which has hit 31-year lows since the referendum on concern about potential damage to the British economy, bounced slightly on the news that the Conservative leadership question would be resolved much sooner than expected.

“Welcome news we have 1 candidate with overwhelming support to be next PM. Theresa May has strength, integrity & determination to do the job,” finance minister George Osborne tweeted.