Social sharing
(CNN)  When everything on Earth has been shared and reviewed on social media, it’s time to take to the skies.
While we used to wait until the plane touched down before we began logging our vacation’s every meal, every hotel and every landmark, the launch this month of TripAdvisor’s new airline reviews service means the sharing starts at check-in.
Harnessing the power of its global community of 350 million users, the new platform features flight reviews from 48 countries in 29 languages and covers every major carrier worldwide.
As well as rating flights in eight categories, including legroom, seat comfort, and food and beverage, and in-flight entertainment, reviewers can upload photos.
Be it a limp salad, scandalously scanty legroom, or chewing-gum left on a seatback, it’ll all gets mercilessly documented.
“We’re quickly becoming one of the largest places to find airline imagery and cabin content in the world,” says Bryan Saltzburg, SVP and General Manager of Global Flights Business at TripAdvisor.
“It really helps consumers see what they’re going to get.”

But rather than the rants that might be expected, Saltzburg says the reviews typically “skew positive, 3.7 on average.”
Most posts are “quite well-rounded. When there’s a delay it’s about how well the airline handled the delay.”
The feature his team is most proud of, however, is FlyScore (currently in beta).
Individual flights — rather than airlines — are given a one-to-10 score based on traveler reviews, the quality of the aircraft, in-flight amenities and the duration of the itinerary.
“It’s different by route,” explains Saltzburg. “So many different carriers fly different routes and different aircraft” and the seats, legroom, entertainment and Wi-Fi options can vary greatly from plane to plane.”
It’s to “help customers understand the true trade-offs they’re making when they’re choosing between their flights in a real live display.”
TripAdvisor’s new platform doesn’t give an overall ranking for airline performance worldwide.
“I don’t believe there’s a tried and true leader every single time in every single market that’s consistent, and static,” says Saltzburg.
“Flying and shopping availability is dynamic and our system is just as dynamic to make sure you get a very granular assessment of all aspects, including aircraft, and airline, down to the type of seat you’re going to be in.”
But with all that in mind, there are still airlines that are winning at the flight reviews game.
As of July 22, there are 34 airlines with a top-of-the-class rating of 4.5, 20 of which have been reviewed more than 300 times.
(Five — Maya Island Air, Cem Air, First Air, Kish Air and Next Jet — have maintained a full 5.0 rating, but with only 22 reviews between them).
Here are those top 20 most-loved airlines on TripAdvisor, with the biggest number of cheerleaders worldwide.
MORE: Had a bad flight? You can now tell the world on TripAdvisor 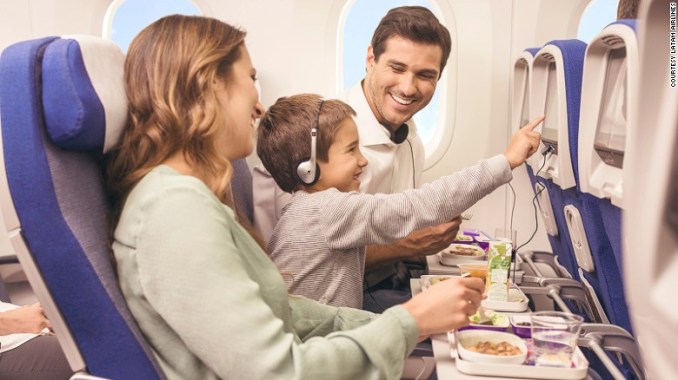 About: South American airline, formed from merger of Tam Airlines and Lan Airlines.
The reviewers say: “Best airline to fly to Brazil,” declares IsabellasTrips from New York. “Great onboard entertainment, very nice staff, good food and drinks.”
Lucas from Rio de Janeiro and Florencelage were both disappointed by the seat recline, while Brissy2 from Brisbane complains of only being offered a “ham and cheese roll” on a four-hour flight.
Ranked best for: Customer Service, Cleanliness, Check-In and Boarding
Reviews so far: 3,317
MORE: LATAM Airlines: Surging ahead in a recession?

Qatar Airways: “The seats were comfortable, the food was good and the staff were courteous,” says Rema0606.
About: State-owned flag carrier of Qatar, named 2016’s second-best airline in the world by Skytrax, having claimed the top spot in 2015.
The reviewers say: 202countries from Hanau, Germany says, “Business Class in Qatar Airways’s new aircrafts like A350 or B787 is a top-notch product and if you know the seasonal pattern of their special offers, best value for money in business class flying between Europe and Australia”. He adds that the “wine selection is very premium.”
Ranked best for: Customer Service, Cleanliness, In-Flight Entertainment.
Reviews so far: 1,500
MORE: World’s best airline named as …

About: Colombia’s flag carrier and the world’s second-oldest airline, after KLM.
The reviewers say: CarlosGMF from Guatemala suggests that you “Regularly check for sales on your flight. They offer un-announced sales on popular flights.”
Jerry_s73 from Aruba adds: “If you book early they offer sometimes a promotion deal on business class which is really worth it.”
StefanvdSa offers the tip: “Bring your own USB cable so you can recharge your phone.”
Ranked best for: Customer Service, Cleanliness.
Reviews so far: 1,412

About: Major U.S. airline and the world’s largest low-cost carrier. Ranked second in North America for customer satisfaction by J.D. Power in 2016. The Boeing 737MAX is set to launch with Southwest in late 2017.
The reviewers say: Users complimented the service provided for elder passengers and passengers with disabilities. RD S from Phoenix, Arizona says “pre-boarding is easy for those who need additional time, and the crews are extremely knowledgeable” about customers with additional needs.
Peterstravels2016 from Houston, Texas praised the “curb-side service from beginning to end. Makes an elder like a dignitary” while MariaLauraBov found it “cheap and easy to book” with a user-friendly website.
Ranked best for: Customer Service, Cleanliness, Value for Money, Check-In and Boarding.
Reviews so far: 1,300
MORE: 5 cool planes you might find yourself traveling on soon

No need to worry about elbow room when flying Singapore Airlines first-class.
About: Named best airline in Asia and third-best airline in the world by Skytrax in 2016. Named Best Business Class and Best In-Flight Entertainment in AirlineRatings.com’s Airline Excellence Awards 2016.
The reviewers say: JetConquistador from Sydney declares it “one of the best airlines I have experienced” but, having flown the Boeing 777 and the Airbus A380, says “the A380 offers more personal storage space.”
Daniel P agrees: “The leg room was a little bit tight on the B777-300ER economy section” and he recommends flying premium economy on the B777 aircraft if possible.
Ranked best for: Customer Service, Cleanliness, Food and Beverage, Check-In and Boarding, In-Flight Entertainment.
Reviews so far: 1,126
MORE: AirlineRatings names ‘most excellent’ airlines for 2016

About: Russia’s flag carrier, named best airline in Eastern Europe in 2016 by Skytrax.
The reviewers say: pt_demarc from Stainz, Austria says, “the fleet is very new, average age some 3 yrs or so. I was flying with an almost brand new A320 with leather Recaro seats and a 3 yrs old B737-800. Very smooth both.”
Iamglobalboy from Sydney said he chose it for the “cheapest and only direct flight from Hong Kong.” Legroom was “quite spacious” but “inflight entertainment wasn’t that enjoyable since they didn’t have individual screens and they play Russian movies.”
Rated best for: Customer Service, Cleanliness, Check-In and Boarding.
Reviews so far: 960

About: Indonesia’s national airline; cabin crew named best in the world by Skytrax in 2016.
The reviewers say: Phil C from Sydney, Australia flew to Bali in Business Class “on a promo fare, which is extremely good value for money. The A330 was very new – it still had that new aircraft smell.”
455annetteb from Jeddah, Saudi Arabia says a “long journey was made completely bearable by Garuda.
“Cabins were wonderfully clean and tidy with fantastic leg-room and comfort” and the crew were “extremely attentive and personable.”
Rated best for: Customer Service, Cleanliness.
Reviews so far: 691

About: American low-cost carrier, which CNN’s Richard Quest flew from L.A. to New York during his round-the-world trip on budget airlines.
His verdict: “JetBlue has the best food and the most freebies: Wi-Fi, basic TV and a snack zone. It has the most legroom in a standard seat (32-inch pitch). Planes feature business section, seat-back video and proper seat power.”
The reviewers say: Sherri217 from New Jersey says: “Clean, friendly, good service, smooth flight and got there early, what more could you ask for.”
Rated best for: Legroom, Customer Service, Cleanliness, Check-In and Boarding.
Reviews so far: 683
MORE: Richard Quest: 10 things to know about budget airlines

Photos:
10. JetBlue Airways (656 reviews) – CNN’s Richard Quest flew from L.A. to New York on JetBlue during his round-the-world trip on budget airlines. Of the carriers he used, he said that “JetBlue has the best food and the most freebies: Wi-Fi, basic TV and a snack zone.”

Photos:
9. Garuda Indonesia (691 reviews) – Phil C from Sydney, Australia flew to Bali in Business Class “on a promo fare, which is extremely good value for money. The A330 was very new — it still had that new aircraft smell.”

Photos:
6. Southwest Airlines (1,276 reviews) – Southwest is a major U.S. airline and the world’s largest low-cost carrier. It ranked second in North America for customer satisfaction by J.D. Power in 2016. The Boeing 737MAX (pictured) is set to launch with Southwest Airlines in late 2017.

Photos:
4. Qatar Airways (1,500 reviews) – Qatar Airways, Qatar’s state-owned flag carrier, was named 2016’s second-best airline in the world by Skytrax, having claimed the top spot in 2015. “Business Class in Qatar Airways’s new aircrafts like A350 or B787 is a top-notch product,” says 202countries from Hanau, Germany.

READ ALSO  Buhari to IBB, Gusau : Tell Nigerians why you removed me from office