Nineteen candidates are vying for the ticket to the Government House. But the main contest is seen to be between Godwin Obaseki of the All Progressives Congress, the ruling party in the state, and Andrew Ize-Iyamu of the Peoples Democratic Party.

Seven political parties have women as their deputy governorship candidates.

A total of 25,000 police officers were deployed across the state to ensure peace and security during the polls, while 44 observer groups were accredited by the Independent National Electoral Commission as election monitors.

PREMIUM TIMES’ Josiah Oluwole and Ben Ezeamalu are in the state to bring you live, minute-by-minute updates of the election as it unfolds in the 18 local government areas of the state.

Voting material have arrived at Polling Unit 005 in Benin.

An INEC adhoc staff explains the voting process to prospective voters at a primary school in Benin.

“The process has changed. Now after accreditation, you vote immediately.

“Voting starts by 8 am and stops at 2pm. Those who are in the queue when it’s 2pm will be allowed to cast their votes.” 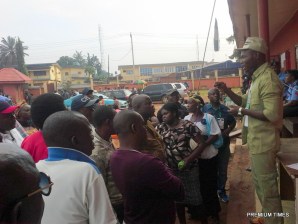 At PU 001 in Asoro Primary School, Benin, a party agent attempted to tell people to vote for her party.

Eghosa Arase, a voter, said everything was fine until the agent began canvassing for her party.

“The election is going peacefully, but some certain things is happening, some other members of some party, they are trying to cause crisis though we’ve tried to bring everything down.

“When you want to canvass, you have to canvass at home before you come here.”

PREMIUM TIMES found out that one of the major parties was giving out N2,000 to have people vote for its candidate.

80-year-old Alice Akpaha arrived at the polling unit with her temporary voters card and was told she couldn’t vote. 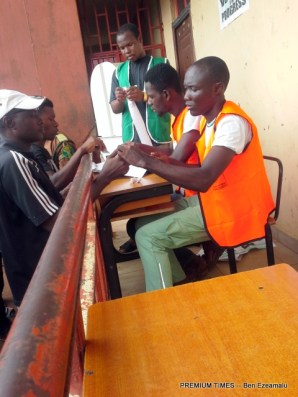 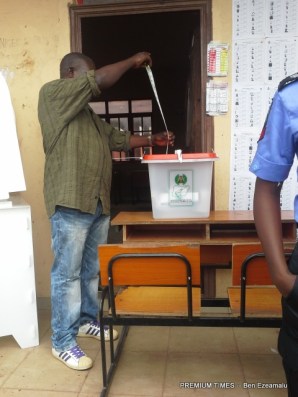 Godwin Obaseki, the APC candidate, arrives at his polling unit to cast his vote and shouts of ‘next governor, next governor’ rents the air. 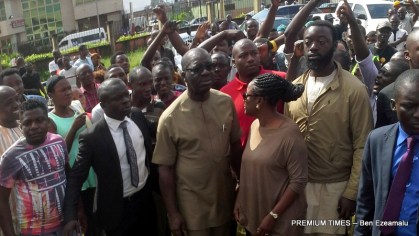 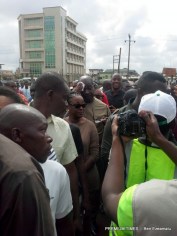 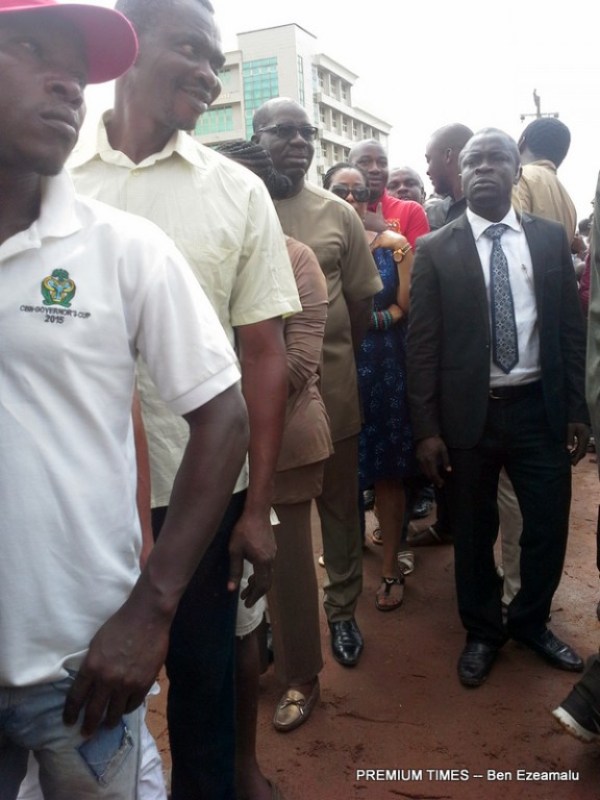 Mr. Obaseki, speaking in Pidgin English, said he is impressed with the voter turnout at his polling unit.

“Na my papa area where dem born me. So a lot of my family dey around here and everybody dey happy say governorship candidate come from their own area,” he said.

Mr. Obaseki is queued behind his wife. There are still 26 people before them.

“The queue for my unit is still very long, it will take some time but I no mind at all. Everything dey very calm, peaceful, no trouble at all.”

Peter Nwadichi, an election monitor and the Coordinator, Network on Good Governance, told PREMIUM TIMES that “The process has been peaceful in the sense that materials came on time. As we speak people are being accredited, voting is taking place simultaneously.”

PDP candidate, Andrew Ize-Iyamu, yet to vote at his Iguododo village.

He took out time to move around his community greeting elders and community leaders.

Voting commenced in the area AT about 8.30 a.m. and everywhere is calm and peaceful.

While doing this, cameras were not allowed to take pictures.

Mr. Obaseki voted at exactly 10.30 a.m., one hour after joining the queue.

Afterwards, he told journalist he had confidence in INEC conducting a free and fair poll.

“We’d had an isolated incident from somewhere in Edo Central but I think that is being handled. 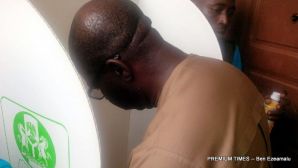 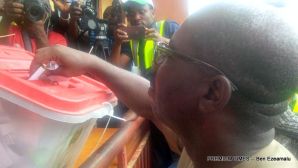 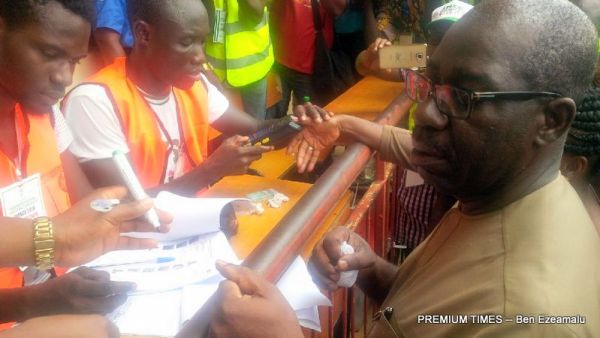 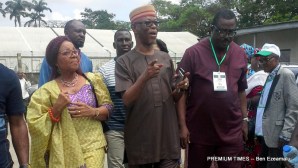 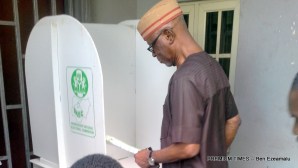 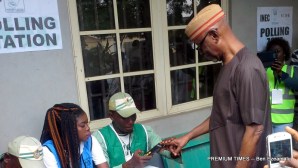 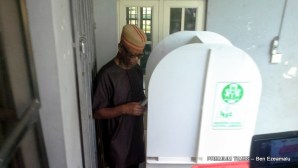 “It’s peaceful so far, I’ve been watching on TV.”

At the PU where he voted, PREMIUM TIMES observed APC members compiling a list and giving out money (a beneficiary said it was N10,000 each) to voters. A fight almost broke out in the process.

When Mr. Oyegun was confronted with the development, he replied:

“When I look at a place like this I don’t know how you can give someone money. How do you know somebody has voted, given how secret it truly is, nobody will know how you’ve thumb printed.

“Please is there somebody sharing money let me go to him and take my own.”

On the security arrangement for the election, the APC chairman described it as “lovely.”

“Well, I’m national chairman of the party and it was something that was of grave concern for us all the time. All the security agencies have given us iron clad assurance that there will be no incident, at least, no major incident.”

Matthew Urhoghide, senator representing Edo Central, after voting at PU 004, George Idaa Model Primary School in Benin, said the issue of vote-buying by the APC should be nipped in the bud.

“There is criticisms for some of the things going on, particularly the horse trading and the haggling, the touting that is going on,” he told PREMIUM TIMES.

“It’s very obvious in this Unit 4 and, of course, I think this is obscene. The APC is doing it with a whole lot of impudence.”

But for a quick security intervention, the safety of election observers would have been jeopardized, as thugs tried to disrupt voting activities at Unit 26 and 27 at Iduenbo Ward, Orhiowon Local Government Area.

The scene of the skirmish was not far from Iguododo, the village of the Peoples Democratic Party candidate, Osagie Ize-Iyamu.

Officials of Cleen Foundation were at the unit to observe the election when they observed some of the thugs create a scene.

As they tried to take pictures, the thugs assailed them, but they fled in their vehicle leaving one of them behind.

One of the officials, Chigo Okoro, told PREMIUM TIMES that the thugs pursued them until they got to Iguododo. He said they were rescued by officials of the Nigeria Security and Civil Defence Corps.

The security officials immediately escorted the observers back to the scene of the crisis to secure the life of the Cleen official left behind.

When PREMIUM TIMES got to the unit, calm had returned.

The Candidate of the Peoples Democratic Party in the Edo governorship election, Osagie Ize-Iyamu, voted in his Iguododo community at about 10 a.m., on Wednesday, praising the conduct of the election so far.

Mr. Ize-Iyamu, who did not queue for his turn when he arrived at his unit 26, Ward 5, voting point, was immediately given the chance to exercise his franchise as soon as he arrived.

He said the exercise was going smoothly and that the card readers within his community were working perfectly well.

He, however, expressed doubts that the same was witnessed in order centres, as telephone networks were so bad he could not reach out to his agents to determine the state of things.

He expressed hope that the peaceful conduct would continue throughout the election.