The former husband of Meghan Markle remarried this weekend in a lavish Californian ceremony almost a year after his former wife became royalty.

As the Duchess of Sussex was enjoying the heady days of new motherhood with Prince Harry by her side, on the other side of the world Trevor Engelson was also beginning a new chapter. 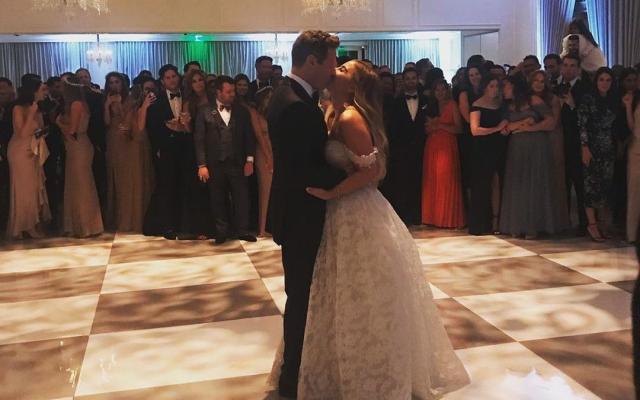 The Hollywood producer and director, 42, who married Ms Markle in 2011 before they divorced two years later, wed Tracey Kurland, a 31-year-old nutritionist and heiress to a multi-million dollar fortune.

The couple chose the Rosewood Miramar Beach resort in the star-studded haven of Montecito, a few miles south of Santa Barbara, for their big day.

They have been dating since 2017 and got engaged last June on a trip to the wine region of Napa Valley.

According to guests who circulated photos on social media, they said their vows outdoors under a canopy of white roses and fairy lights on Saturday evening.

The bride chose a traditional, lace off-the-shoulder gown and the bridegroom wore a dinner jacket. The bridesmaids wore gold dresses and wore crowns of baby’s-breath flowers on their head, while Mr Engleson had baby’s-breath as a boutonnière.

Guests were served oysters, caesar salad and burgers, including the vegan Impossible Burger.

An unnamed source told the US TV show Entertainment Tonight: “It couldn’t have been more different than the royal wedding,” the source says.

“This was not stuffy! It was fun and casual and absolutely beautiful. Everyone was having the best time, especially Trevor and Tracey.”

READ ALSO  Cardi B Explains Why She Is Filling For divorce From Her Husband, Offset

According to excerpts from Andrew Morton’s book Meghan: A Hollywood Princess, the marriage ended suddenly in August 2013.

“A wealthy entrepreneur friend claimed the marriage ended so abruptly that Meghan sent her wedding and engagement rings back to Trevor by registered post. Another source confirmed that the decision to end the marriage was made by her and that it had come ‘totally out of the blue’.”

It was later reported that their relationship faltered when the actress relocated to Canada for the filming of Suits.