British police said they arrested a 23-year-old man Monday in connection with last week’s deadly bombing at a concert in Manchester, bringing the total number of people in custody in Britain to 14.

Greater Manchester Police said in a statement that Monday’s arrest took place in Shoreham-by-Sea “on suspicion [of] offenses contrary to the terrorism act.”

The May 22 suicide bombing in the lobby of Manchester Arena just after a concert by American pop star Ariana Grande killed 22 people and injured more than 100 others.

Police have identified the attacker as 22-year-old Salman Abedi, a Manchester native, and are working to piece together his movements in the final weeks before the bombing as well as who else may have been involved.

A total of 16 people have been arrested in the investigation, however, two of them, a woman and a teenage boy, have since been released without charges. 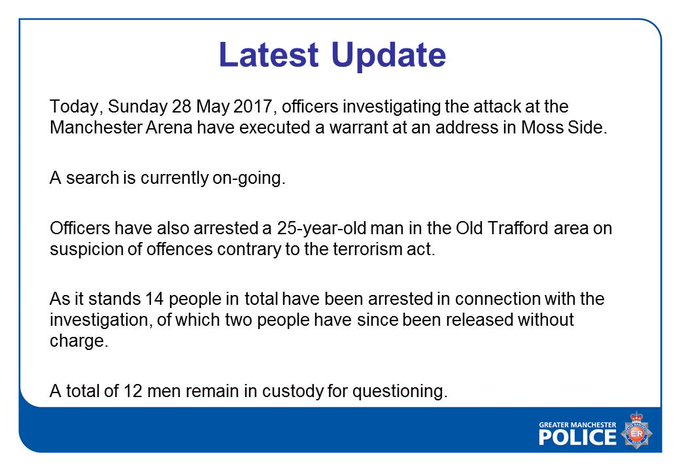 Abedi’s brother and father also were arrested in Libya last week where they are being held. A spokesman said that the brother, Hashim, was aware of Abedi’s plans to attack.

The level had been raised to “critical” — meaning another attack was thought to be imminent — after the concert bombing. The downgrade to “severe” means an attack still is considered highly likely.

READ ALSO  Syrian people do not want Assad as leader - US