JAKARTA (Reuters) – When Jakarta governor Basuki Tjahaja Purnama had some of the capital’s sprawling slums levelled this spring, Muslim groups including the hardline “Islamic Defenders Front” (FPI) moved in quickly to help some of the city’s poorest residents.

The offer of food, shelter, clothes and money was a lifeline to the struggling families. But religious conservatives, who had long opposed Purnama because he was a Christian, did not stop there.

After a video circulated in October of Purnama, also known as “Ahok”, making comments that some Muslims said insulted the Koran, the FPI went into overdrive. 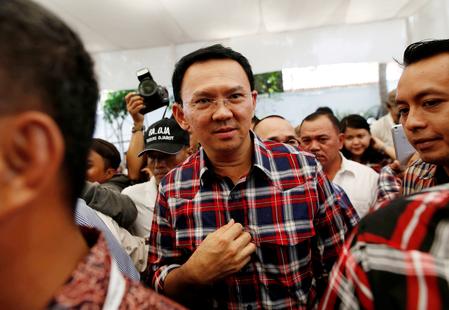 It called for his arrest, bombarded its social media pages with fiery messages and rallied some 150,000 protesters to the streets of the capital earlier this month.

With another mass protest slated for Dec. 2, the FPI has helped trigger a crisis that has engulfed President Joko Widodo, seen as a close ally of Purnama, and damaged the hitherto popular governor’s hopes of re-election in a ballot in February.

The FPI, which divides opinion in Indonesia, has also seized the political agenda, using the blasphemy scandal to get people on to the streets and pushing a message of intolerance in a Muslim-dominated country where hardline posturing rarely makes waves.

“Most victims of evictions are Muslim and they’re already resisting that, quite apart from the blasphemy,” Novel Chaidir Bamukmin, head of the FPI’s Jakarta chapter, told Reuters.

“So on top of that, there’s an insult to their religion. That just makes their spirit stronger. We had already been resisting Ahok for years. The blasphemy is the peak of the problem and our resistance.”

The FPI said it wants Friday’s demonstration to be peaceful, but minorities, including Christians and the lesbian, gay, bisexual and transgender community are fearful of the group.

Around 50 FPI members barged into a Jakarta apartment at the weekend to break up what they said was a gay sex party. The group has vowed to continue to target the LGBT community.

A worried Widodo has moved to soothe foreign investors, whose money is key to the economy. While seeing no disruption yet to business and suggesting tensions may ease after city elections, they are nonetheless wary.

“In an overwhelmingly tolerant country … a small group of hardliners seem to be able to push their agenda, and you have to question what direction the country is headed in,” said a foreign business leader in Jakarta who declined to be named.

Widodo postponed a visit to Australia soon after the Nov. 4 demonstrations, the largest in Jakarta in years.

Throughout November he has held talks with top political, religious and military officials to quell talk of instability, and announced he would “prevent the growth of radicalism”.

The Nov. 4 march was largely peaceful, but sporadic clashes broke out and police fired water cannon and tear gas to control crowds. One person died and over 100 were wounded.

It was an apparent reference to the opposition, which has been accused of using groups like the FPI to hurt not only Purnama’s election chances but also Widodo’s, by casting doubt over his suitability to lead for a second term.

But the FPI could turn up pressure further now that the debate is about Islam and the Koran and not just about how Jakarta is run.

“If a member of my family was insulted, I would be angry, let alone my holy book,” said Muhammad Ridla, 31, who travelled with others from Bandung, a city three hours away, to join the anti-Purnama rally on Nov. 4.

“When that happens, even a person who has a shallow faith like me would be upset.”

Purnama has been in the Islamists’ sights for years.

The FPI believes a Christian, who is also ethnic Chinese, should not hold the powerful position of running the city of 10 million people.

The group, which says it has about five million members, has a history of harassing minorities.

In recent years, they have forced the closure of churches and mosques run by non-Sunni Muslims, raided bars, and caused the cancellation of a 2012 Lady Gaga concert to “protect Indonesians from sin”.

When some Jakarta slums were razed in March and April, the FPI encouraged those evicted to form small “pop-up” groups to demonstrate against clearances, Bamukmin said. Some later joined the Nov. 4 protest.

In September, when the case of alleged blasphemy first surfaced, FPI leaders ratcheted up their rhetoric against the governor, calling for his arrest and preaching in mosques that “blasphemy is non-negotiable”.

The group also began publishing posts hourly, as opposed to two or three times a day, on Facebook, Twitter and in newsletters to express its outrage.

Their online feeds are now crammed with anti-Purnama traffic, as well as some against Widodo himself, and many posts are being liked, re-posted or commented on thousands of times.

As anger grew, the FPI joined an umbrella group that included other Muslim organisations like NU. It used extensive networks in towns and villages to swell numbers on Nov. 4.

Purnama has plenty of supporters, especially among the large middle class who liked the way he cut bureaucracy, tried to de-clog gridlocked streets and spoke his mind.

He denies blasphemy, but has apologised for comments made during a speech in September about his opponents’ use of the Koran in political campaigning.

An incorrectly subtitled version of the speech went viral online where Purnama appeared to be criticizing the Koran rather than his rivals.

Police have opened an investigation into the allegations and questioned Purnama, while prosecutors are expected to bring a case to court in the coming weeks.

Almost without exception, blasphemy cases in Indonesia end with conviction.

Purnama, who is running against two Muslim candidates in February’s election, has slipped to second place as his popularity ebbs, some recent polls showed.

Widodo, who preceded Purnama as the capital’s governor, is seen by many Indonesians as an ally and friend, and the ruling party and coalition continue to back Purnama.

But the president has publicly distanced himself, saying repeatedly that he would not protect him in the investigation.

Widodo has faced criticism from rights activists and his own supporters for allowing hardline Islamists to strongarm the government, and many see the blasphemy probe as an attack on Indonesia’s religiously and ethnically diverse society.

Chinese-Indonesians, who officially account for just over 1 percent of the country’s population, feel a sense of vulnerability reminiscent of 1998, when the fall of strongman Suharto unleashed widespread violence in the capital.

Hundreds of people were killed and thousands of ethnic Chinese fled the country, as mobs rampaged through Jakarta targeting Chinese-owned stores and homes.

Indonesia has the world’s largest Muslim population but recognises six religions and is home to dozens of ethnic groups and people who adhere to traditional beliefs.

Support for Purnama has been trending on social media, where some, like Twitter user @gunardi, have expressed sympathy.

“If anything, he will get a lot more sympathy as someone who has been tyrannized,” the user said.

It remains to be seen if those voices are drowned out in the coming weeks. A rally in Jakarta held after Nov. 4 to “celebrate Indonesia’s diversity” drew around 2,000 people.