While one year may not be enough to judge the performance of the ministers, PREMIUM TIMES’ Festus Owete presents a scorecard of some of the ministers based on their promises, achievements and expectation of Nigerians

– To intensify research and marketing for food.

– To tackle the problem of high rate of malnutrition in the country.

-To tackle food poisoning which has led to the increase of cancer, liver and kidney failure by 25 per cent in the last 25 years.

-Set up 11-member National Fertilizer Technical Committee in line with government’s determination to create wealth and employment, ensure food security and sustained livelihood. The minister also said Nigeria would suspend subsidy on fertilizer until the right formulation of fertilizer was made available to farmers.

-The ministry and the CBN initiated the disbursement of about N75 billion loan to farmers in the 36 states and the FCT under the Nigerian Incentive-Based Risk Sharing in Agricultural Lending.

-Initiated moves to import grasses from Brazil for grazing of cattle, as a way of reducing frequent clashes between herdsmen and farmers.

-Plans to set up grazing reserves or cattle ranches to address the problem.

-To set up, in collaboration with the Ministry of Interior, a special unit of the Nigerian Security and Civil Defence Corps to provide security for host communities of the proposed cattle ranches and protect agricultural investments.

-Secured 5,000 hectares from the Federal Capital Development Authority’s (FCDA’s) 15,000 hectares of farmland, for youth and women, as part of a ‘Farm for Life Scheme’ of the ministry.

-Produced a roadmap where Nigeria would work closely with the World Bank and major international investors to ensure best practices and due diligence in the mining sector.

–Proposed to the National Assembly a bill seeking the creation of an independent regulatory agency in the mining sector. The agency will function like the Nigerian Electricity Regulatory Commission (NERC) in the power sector and the Nigerian Communications Commission (NCC) in the Communications sector. It will be involved in licensing prospective investors, monitoring, inspecting of mining activities.

–Ended the ownership crisis of the Ajaokuta Steel Company by securing an agreement with Global Steel Holdings Limited, an Indian firm, which effectively returned ownership of the company to the federal government. The ministry also renegotiated concession agreement with GSHL for the Nigerian Iron Ore Mining Company (NIOMCO), Itakpe.

— Federal Government to make available an intervention fund to be accessed by serious-minded operators in the mining sector.

–States are now given specific role to play towards exploration and mining licenses issuance, by making their consent mandatory.

— State governments are now beneficiaries of the 13 percent derivation from mining revenues earned from the exploitation of solid minerals from their domains, just like the oil producing states in the Niger Delta region.

-Solid Minerals sector still contributes only 0.3 percent to the Gross Domestic Product (GDP), according to Mr. Fayemi, at the 52nd Conference of the Nigerian Mining and Geosciences Society in Ilorin, the Kwara State capital.

-Illegal mining still thrives in the country with about five million Nigerians still engaging in artisanal mining, according to the minister.

-About 100 kilogramme of gold leaves Nigeria every day and the country loses $1.54 million to illegal mining of the commodity.

Promises: The Minister of state promised to focus on boosting revenue generation by discovering more oil and gas fields; cutting cost; blocking leakages, and promoting transparency and accountability in the ministry’s business.

-Fuel queues disappeared following the deregulation of the downstream sector of the oil industry which led to the jacking up of the pump price of the product from N86.50 to N145.

-NNPC Reforms: Introduced “20 fixes” in the state-run oil company. The reforms included restructuring of the NNPC to bring it to profit yielding entity and reduce loss recorded in the past.

-Moved to resolve the grey areas and hasten the passage into law the omnibus Petroleum Industry Bill which has been before the National Assembly for seven years. The minister said the presidency will present three harmonized bills to the legislature for consideration.

— October 2016 deadline set for the conclusion of modalities for the implementation of integrated personal payroll information system (IPPIS) in oil industry agencies.

— Adoption of work plan to reactivate the refineries.

–Importation of fuel persists: According to data from the National Bureau of Statistics, despite the economic downturn, Nigeria spent N595.5 billion on the importation of fuel in the first six months of 2016, rising by N34.3 billion from the amount spent in the last six months of 2015. The country spent N276.226 billion on petrol import in the first quarter of 2016, while N319.28 billion was spent in the second quarter. The NBS report showed that the amount spent on fuel importation appreciated by 6.1 percent, compared with N561.2 billion spent in the second half of 2015.

-Nigeria still to recover its title as Africa’s largest producer as its output fell to 1.677 million barrels per day in March, as opposed to Angola’s 1.782 million bpd. This was mainly due to attack on oil infrastructure in the Niger Delta region. 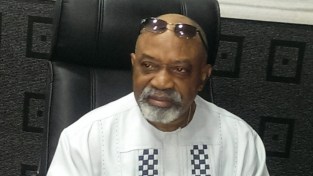 Promises: To tackle unemployment effectively. “We will be at the forefront of the battle to stop the scourge of unemployment in the country,” Mr. Ngige, a former senator, told workers of the ministry. “We must, as a people, put on our thinking caps so that we can chart the way forward for employment generation.”

The minister also said the ministry would provide the enabling environment for all the sectors to thrive just as he said efforts were already on to block all leakages so available resources could be committed to development.

-–Resolved several labour disputes, including the one between the Federal Ministry of Woks, Power and Housing and the National Union of Electricity Employees, which would have thrown the nation into darkness and the one between NUPENG and PENGASSAN and the federal government over anti-labour activities.

-NDE, an agency of the ministry empowered over 4000 Nigerians under the Artisans Resettlement and Mentoring Scheme while recruiting and training 1,850 persons across the nation under the Community Based Training Scheme (CBTS).

–Rehabilitation and re-equipping of NDE skill centres to enhance their training capacity. The target is to train not less than 300,000 per year.

-In August, the NBS reported that Nigeria’s unemployment rate rose from 12.2 per cent in the first quarter of 2016 to 13.3 per cent, as the number of people unemployed or underemployed rose from 24.4 million to 26.06 million.

On power, the minister promised steady power supply, saying “The power challenges are not impossible (to fix), most of them are man-made. I am determined to ensure we get to the point where Nigerian has uninterrupted power supply.” He was to later deny making the promise.

On Housing, the minister promised to provide 40 blocks of housing in each of the 25 state and FCT which will lead to “potential delivery of 12 flats per block and 480 flats per state. Subsequently providing 17,760 flats nationwide.”

Also, promised to build 360 houses in three states through Public Private Partnership (PPP) arrangement in the first phase; develop “Rent to Own” housing scheme for those that cannot afford mortgage; and incorporate a new housing model into the National Building Code.

-Signed a $237 million agreement with World Bank to improve power in the country.

-Although he inherited a little over 2000 MW, in February, the generating capacity of power rose to 5,074 MW, the highest Nigeria has ever generated in the 63 years (1950-2013) of government monopoly of the sector.

-Got approval of FEC to purchase three transformers of 150 MVA to be installed in sub-stations of Shiroro, Osogbo and Kumbotso.

-Unveiled an ambitious housing programme aimed at evolving a nationally acceptable design that reflects the diversity of culture and weather in Nigeria while targeting the low and medium income earners. The minister said he would spend N10 billion to build low income housing estates in the states and the FCT.

-Achieved far less than the 40 projects which he said he would execute in the first year. For instance, the 2nd Niger Bridge, Murtala Muhammed International Airport Road, Lagos, Calabar-Itu-Ikot Ekpene Road are among the many roads that are yet to be rehabilitated. Many major Nigerian roads are still death traps.

-Millions of Nigerians still live without power as the nation’s current generating capacity is merely 3,531.7 as of late October. It was 4,028 mid-October. The Nigerian Association of Energy Economists said only 45 percent of the country’s population are connected to the national grid and regular power supply is restricted to about 25 percent of the population. A group, Centre for Global Development said over 80 million Nigerians live without electricity.

-Increased electricity tariff by 45 per cent in December 2015, increasing it to N22.8 kilowatts per hour. The minister refused to obey a court order reversing the new tariff regime.

-Millions of Nigerian still do not have access to affordable housing. The World Bank said Nigeria has a housing deficit of about 17 million units and needs about 700,000 additional units each year for the next 20 years. A recent study by a top international consulting firm said about 80 per cent of Nigerians cannot afford a house that is more than N1 million.